Laguna Beach, California (July 18, 2011) — American Michael Lewis driving for the PREMA Powerteam in the Formula 3 Italia Championship visited the famed Imola Circuit in Italy this past weekend, along with 16 other competitors. After the two 30-minute race events, Michael climbed to the top of the Rookie Championship. 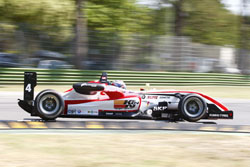 QUALIFYING
Michael Lewis and his PREMA Powerteam engineer, Fabio Zilio, worked in diligent fashion during the two free practice sessions on Friday to dial in the Dallara FPT car to obtain maximum performance on the high-speed Imola Circuit. “We tested here at Imola during the pre-season and once again last week and I began to feel more comfortable each time I went out on the circuit,” said Michael Lewis. “My engineer, Fabio, worked hard to get me comfortable and we tried a number of settings and came up with what we thought would give us a strong performance in qualifying on Saturday morning.”

During the 30-minute qualifying session, Michael was positioned second until late in the session when he slipped to fourth. Just before the session ended Michael pulled off a strong lap and as the checkered flag waved he recorded his best qualifying effort of the season with a lap time of 1:41:659, which placed him third and insured Michael an up-front starting position in Race 1.

“All of the hard work during the test sessions and the two Friday free practice sessions paid real dividends as the car was perfect, and I just had to hit my marks and we ended up with our best qualifying effort of the season. Fabio made all the right decisions and I was able to do my job and we ended up third on the grid for Saturday’s race,” added Michael Lewis.

RACE 1 (Saturday)
The weather was perfect as 16 Formula 3 Italia cars and drivers were placed on the grid for Formula 3 Italia Race 1. The race would be 28 minutes in length plus one lap and Michael was prepared for a strong effort. When the lights went off all the cars sprinted toward turn one, except Michael. Unfortunately, he stalled the car and by the time Michael got going he slipped back to 11th position. During the early stages of the race Michael worked hard and passed cars, and when the race ended he finished sixth. 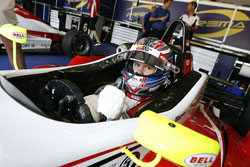 “I wanted to make a clean start and was concentrating on getting everything just right but I released the clutch prior to releasing the hand-brake and the motor momentarily stalled. It was a terrible mistake and I felt bad for everyone on the PREMA team who worked so hard to get me a good starting spot. I did the best I could to get back some positions and sixth place was as far as I could get with the number of laps I had to work with,” stated Michael Lewis.

RACE 2 (Sunday)
Again it was another perfect day at Imola Circuit and the Formula 3 Italia event was scheduled for a 10:00am start. The starting position for the Sunday race is determined by an inversion of the top eight qualifiers therefore Michael was slotted sixth on the grid for the start of Race 2. This time he managed a “perfect start” and immediately slipped in to fourth place. Towards the end of the first lap Michael was pushing for third, but went off the track and lost two positions. As the race progressed, Michael passed his teammate, Raffaele Marciello, for fourth and set the fastest lap of the race. Michael then put heavy pressure on the third place driver, and when the race ended he finished a strong fourth position. Unfortunately, Michael was unable to keep the fastest lap of the race, as he was beaten by less than a tenth in the remaining stages of the race.

“Today I had a perfect start and was trying to get as many positions during the first lap as possible. I was trying to get another spot when I left the track momentarily but eventually I was able to pass one more care before the end of the race.  My PREMA  car was really good today and I was battling hard for a podium position,” said Michael Lewis.

Angelo Rosin, Team Principal for the PREMA Powerteam, added, “I’m not fully satisfied with the weekend results here in Imola. The potential was much more than the fourth place achieved today and the sixth place of yesterday. Michael again has demonstrated during qualifying to be able to fight for the top position. His third place was not just a case but a result of team work done since the beginning of our relationship. But we can’t forget that Michael is still a rookie and we are only at the third race of the championship. I am pretty confident for the upcoming races, where Michael will continue to perform with even better results.”

Michael and the PREMA Powerteam will participate in a Formula 3 Italia Collective Test Session this Thursday in Adria, Italy, followed by another Collective Test Session on August 4 at Spa-Francorchamps, Belgium. His next event will be Rounds 7 & 8 of the Formula 3 Italia Championship at Spa-Francorchamps on August 6 & 7, followed by his return to the United States for a Late Model race at Toyota Speedway at Irwindale on August 20.