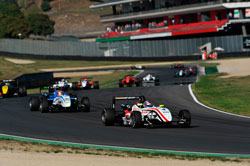 Laguna Beach, California (October 3, 2011) — American racer Michael Lewis is back in the hunt for the Formula 3 Italia Championship title fight with a win and a top-five finish from this weekend’s event at the Mugello Circuit in Italy.

“I have great confidence in my PREMA Powerteam engineer Fabio Zilio and mechanic Marco Sbabo,” said Michael Lewis. “We tested well here a week ago so I knew if I did my job well then I would have the opportunity to improve my position in the overall Formula 3 Italia Championship.” 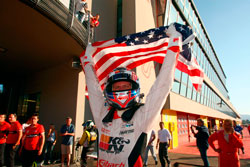 “My PREMA Powerteam Dallara car was good in both practice sessions,” reported Michael. “I focused on my line and reference points. I felt confident that we could qualify up front during the Saturday morning qualifying session.”

QUALIFYING
Qualifying conditions on Saturday morning were perfect under a blue sky. For the 30-minute qualifying session each driver has access to two sets of tires. Michael claimed P-6 on the first set of tires. Then he came into his pit area and the PREMA team put on four brand new tires and sent him back out with only nine minutes remaining in the 30-minute qualifying session. On Michael’s third lap with the new set of tires he carved out a respectable lap that gave him the P-3 position for qualifying. This position placed him third on the grid for Saturday’s Round 13 of the Formula 3 Italia series. The top eight qualifiers are then inverted for the second race, which placed Michael in the sixth starting position for Sunday’s race.

“I worked very hard for the pole position but came up just a bit short,” described Michael. “However, starting on the inside of row two is a good place to start. The PREMA cars have been fast during testing at Mugello so I was confident about obtaining a good result in the race.” 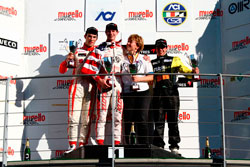 RACE 1
The weather continued to cooperate on race day with blue skies and very little wind. The 14 Formula 3 Italia drivers took to the grid for the 28-minute plus one lap race. Michael Lewis positioned his PREMA Dallara third on the grid just behind the two Team Ghinzani drivers Facu Regalia and Edoardo Liberate. When the lights went out Michael was able to get an excellent launch and headed off into the first turn just behind the two Ghinzani drivers. After a wild dash into the first turn, Michael escaped unscathed still in third position. On lap five, Facu Regalia experienced engine failure causing him to go off the course before retiring in the pits, which moved Michael into second place as he began closing in on veteran driver and then leader Liberati. Michael’s PREMA Powerteam Dallara car was working perfectly, which allowed Michael to pull alongside Liberate at the end of the long Mugello straight with only four laps to go. Michael made a bold outside pass at the famous right-hand corner on the track and came out in the lead. Michael was able to pull away to win the race.

This was Michael’s second Formula 3 Italia race win, with the first coming at the famous Spa-Francorchamps Circuit in August.

“I owe this win to my PREMA Powerteam colleagues and the work of my engineer Fabio Zilio and the advice from my good friend Giacomo Ricci. I knew from the start of the race my car was good, so I said to myself, ‘stay calm and do not abuse the tires.’ Halfway through the race I could see that Edoardo Liberati was having difficulty as he ‘grained’ his tires and I continued to be patient. Then with the aid of the slipstream at the end of the long straight, I made my move on the outside and it worked,” said a very pleased Michael Lewis as he stood on the podium at the Mugello Circuit.

The podium appearance reminded Michael of a trip he and his family took to the Mugello Circuit in 2005 when Michael was racing karts in Italy. Mugello Circuit Media Director Riccardo Benvenuti gave the Lewis family a tour of the Mugello facility. Michael stood on the Mugello podium in 2005 as a guest, but six years later he earned a podium spot by winning the Formula 3 Italia race. 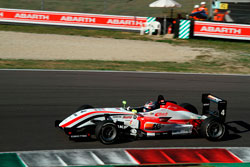 RACE 2
After Saturday’s Round 13 win, Michael’s goals for the Sunday’s Round 14 were to drive a clean race, keep pace with the lead pack, and try to gain as many positions as possible. Because the grid positions for the second race of the weekend are based upon an invert of the top eight qualifiers, Michael was placed 6th on the grid for the start of Race 2. When the lights went out to start the race, all 14 drivers made a mad dash to get to turn one. Michael raced conservatively to the corner and came out of turn one in 7th position. As the race progressed, Michael was able to gain two positions and finished 5th in Race 2.

“After the win on Saturday my goal today was to finish as high as I could and not make any mistakes,” explained Michael. “My PREMA car was really good and I was able late in the race to close in on Victor Guerin and tried one time to overtake him but I did not have to room to finish the pass. Then I settled in and finished the race in 5th position. Now there is Monza with just two race events to go and I must focus on the work necessary to do well at Monza. We have a collective test session coming up next week and with the support of my engineer Fabio Zilio and mechanic Marco Sbabo we will develop a good plan for Monza.” 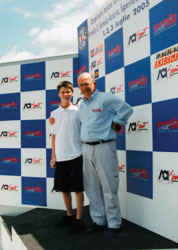 “My goal right now is to work hard and prepare for Monza,” said Michael. “I am focused on doing well at the next race, and then we will see how the championship turns out.”

The final two races of the 2011 Formula 3 Italia Championship will take place on October 15 and 16, at Monza.