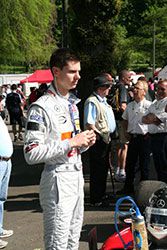 Pau, France (May 11, 2012) —  American Michael Lewis joined 23 other drivers today in Pau, France, to compete in the third and fourth rounds of the FIA European Formula 3 Championship, which was revived for this year.

The Pyrenees Mountains serve as the backdrop for this scenic yet tight street course with close guardrails and sidewalks, while the racing weekend got started today with two practice sessions. Drivers from the Formula 3 Euro Series, which Michael and his three PREMA Powerteam teammates are competing in this season, are joined by drivers in the British Formula 3 Series, combining two of Europe’s finest and most professional series for up-and-coming drivers who seek to move up to the ranks of Formula 1.

The first of two 45-minute practice sessions took place Friday morning as the drivers used the time to learn the tricky street circuit while engineers and mechanics could prepare for the second session where they fine-tune the cars for Saturday’s qualifying session.

Michael climbed into his PREMA Powerteam Mercedes-powered Dallara F-312 and took to the track for the first time. His instruction from engineer Cosimo Prusciano was to gain familiarity with the track by running laps and building his confidence during the session. The team decided for Michael to run his race car on used tires the entire practice session.  Michael was running in the top ten during most of the session and then a number of drivers late in the session put on new tires. At the end of Free Practice Session 1 Michael was 12th on the official time sheet. 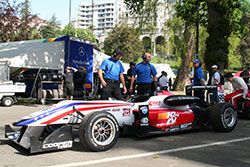 “This is my first time here at the Pau Street Circuit and the team wanted me to get comfortable on the course and run as many laps as possible,” explained Michael Lewis. “The circuit is fast and there is little margin for error. I know that I will have a much better idea as to how to attack a couple of corners and improve my time for the afternoon Free Practice Session. The PREMA Powerteam cars are good here and I can see where improvements can be made for me to move up the time charts.”

The second 45-minute practice session took place on Friday afternoon. Only a few laps were recorded when one driver hit the wall hard in Turn 8, which brought out the red flag. After the track went green again, the drivers started recording very good lap times, including Michael. Again he started the practice session hovering around the top 10.  About halfway through the session he came in for another set of tires. After returning to the track, immediately he turned a very quick time in Sector 1 but was unable to get maximum performance from the other two sectors. Michael’s best time for the practice sessions was 1:13.142, putting him 15th out of 24 drivers on the official time chart, and only 1.5 seconds behind the fastest practice lap. 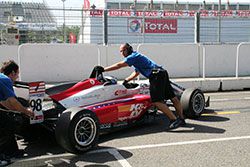 “I have the speed now,” said Michael, “so I must put all three sectors together and then record a strong qualifying time tomorrow morning. Each time out I am getting more and more comfortable with how to approach this circuit. My engineer has the car where it drives smoothly, so I am confident that qualifying will go well.”

Qualifying for the F3 cars will take place Saturday morning beginning at 9:25 a.m. local time. The race organizers decided to divide the qualifying session into two groups because of the high car count. The two groups will allow everyone to manage their spacing on the track because only half of the number of cars will be on the track for each session.