Laguna Beach, California — An exciting international race series will visit California for the first time in October, and Michael Lewis will be a part of it. 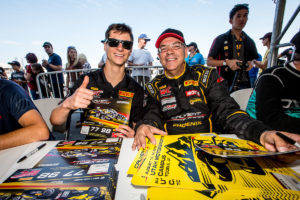 Michael Lewis (left) and Preston Calvert (right) reunite as teammates when they compete together with Andrew Davis in an eight-hour endurance race at Mazda Raceway Laguna Seca on October 15.

Michael will join Preston Calvert and Andrew Davis and in the No. 77 Calvert Dynamics/GMG Porsche 911 GT3 R as they compete in the third round of the SRO Intercontinental GT Challenge, on Sunday, October 15, at Mazda Raceway Laguna Seca.

Formed in 2016, this four-race international series will visit North America for the first time. With stages on four continents, the 2017 series began in Australia in February with the Liqui-Moly Bathurst 12 Hours, followed by July’s Total 24 Hours of Spa. The fourth and final race is scheduled for December 9, with the Motul Sepang 12 Hours. Michael and his teammates will only compete in the third round because the series, which features GT3 and GT4 homologated sports cars, was designed to allow local teams to represent various car manufacturers, with the Global Motorsports Group (GMG) Racing competing in Porsches. Many teams competing at Mazda Raceway Laguna Seca will be familiar to fans of the Pirelli World Challenge (PWC) as several of these teams, cars and drivers will participate in the eight-hour endurance contest on the 11-turn, 2.238-mile dedicated road course in Salinas, California. 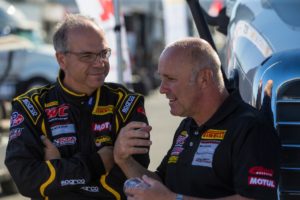 Stefan Pfeiffer (right), race engineer for Michael Lewis during the 2015 and 2016 Pirelli World Challenge seasons, will bring his expertise to the team and once again rejoin Michael with Preston Calvert (left).

GMG Racing has entered two cars for the event, with a second car to be named later. Team principal James Sofronas earned six wins in 2017, and the team took 17 PWC wins last year. In addition to GMG Racing, several other teams that compete regularly in the PWC have also entered, along with some international teams from Australia and Germany.

“Thank you to Preston Calvert for the opportunity to race with his team,” stated Michael Lewis. “I appreciate him including me into his strong team, and I really look forward to racing with him, Stefan Pfeiffer, and Andrew Davis; team members that I have worked with in the past two seasons of the Pirelli World Challenge. GT3 race cars are really fun to drive, and it will be fun to race at Laguna Seca in another GT3 car! Thank you to my fans and friends as well for following my 2017 race season. If you are in attendance at this race, please stop by our pits and visit with us!” 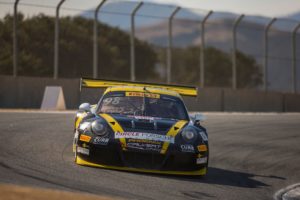 Calvert and Lewis look to continue their successful time together as co-drivers, with Andrew Davis, at the famed Mazda Raceway Laguna Seca road course.

You can tune in to watch the third round of the Intercontinental GT Challenge, the Mazda Raceway California 8 Hours, for GT3 and GT4 sports cars, scheduled on CBS Sports Network. Coverage will begin on Sunday, October 15, at 12 p.m. until 2 p.m. PDT, and will conclude 7 p.m. to 8:30 p.m. PDT. In addition, from 2 p.m. to 7 p.m. PDT, the race will be shown live on www.intercontinentalgtchallenge.com or www.sro-motorsports.com.