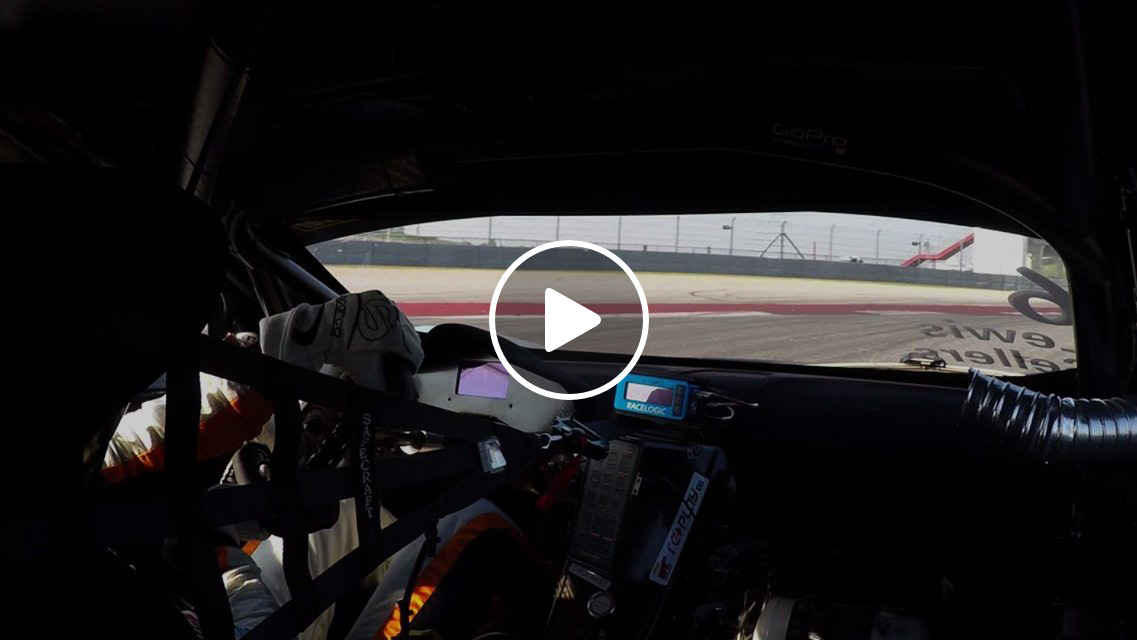 Michael Lewis and Bryan Sellers earned their best result of their co-driving duties for 2017 in the No. 6 K-PAX Racing McLaren 650S GT3 at Circuit of The Americas (COTA) in Texas with a 5th-place finish on Sunday, September 3. 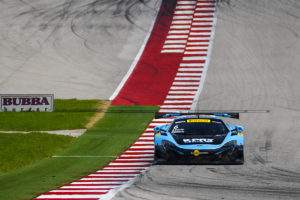 Circuit of The Americas in Austin, Texas, played host to Rounds 9 and 10 of the Pirelli World Challenge SprintX Championship on September 2 and 3. All photos by Bob Chapman.

Michael joined the K-PAX Racing team at Circuit of The Americas in Austin, Texas, on Friday, September 1, for SprintX practice in preparation of Rounds 9 and 10, as well as completion of the series’ Round 4, which was originally scheduled to take place at Canadian Tire Motorsport Park in May, but was delayed and rescheduled due to heavy rain.

The No. 6 K-PAX Racing McLaren 650S GT3 was placed 18th of 28 cars on the starting grid to begin Round 4, with Michael taking driving duties first. The qualifying grid was set from the qualifying results at Canadian Tire Motorsport Park in May; because Michael was a new addition to the No. 6 McLaren, the team had to start at the back of the field. When the green flag flew, Michael had quickly moved up to 15th position, and was running in 13th when he brought his car into the pit area for the mandatory pit stop and driver change with Bryan Sellers. Bryan picked up where Michael left off as he continued to pass cars. In fact, he made a thrilling last-lap pass to take control of 8th position, which is where he completed the race. 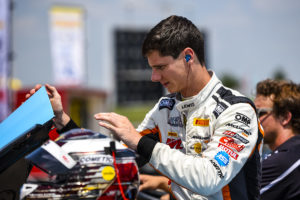 Michael Lewis prepares for the rescheduled SprintX Round 4 held at COTA on Friday, September 1, which was originally to take place at Canadian Tire Motorsport Park in May.

“I had quite a good start and passed some cars on the first lap,” explained Michael Lewis. “This race was held in the evening just as the sun was setting, so it was fun to race in a sort of evening setting. The first turn gets really congested and it is important to just make it through with no contact. We got through the first turn and started using the grip of our car and the good balance of our car, immediately. I was following my teammate in the No. 9 car through the field and we were really fighting hard with the other cars and making our way up the pack nicely. It was fun racing with my teammate, Ben Barnicoat, as he would make a move on a car and I would then take that opportunity to then pass the car that he just passed. Starting from the back and finishing where we did was quite solid. Bryan Sellers, my co-driver, finished his stint when it was pretty much completely dark outside and he made a nice move to get one last position before the checkered flag flew.” 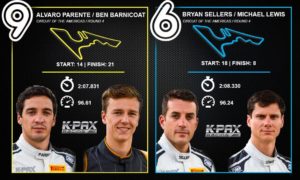 Saturday returned to the normal schedule for the weekend with qualifying occurring around noon. During the qualifying session with Bryan Sellers driving the car, both Bryan and the team found a loss of power in the car from an overheating issue. This mechanical issue placed the No. 6 car on the grid in 13th place. For Saturday afternoon’s Round 9, Bryan Sellers and Michael Lewis were determined to get back toward the front, and that is exactly what they did. Bryan had an excellent first stint and passed many cars just before entering the pits. When Michael began his stint, after a well-executed pit stop, he found himself in the 7th position and looking to charge up the pack. Unfortunately, after about three laps, the same overheating issue that occurred in qualifying again affected the No. 6 McLaren. As a result, Michael returned to pit lane to have the team service the car. When Michael returned to the race, he was in the 13th position. Luckily, just as Michael started driving again, a full-course caution period occurred and Michael was positioned back with the pack. When the green flag flew to restart the race, there were only two laps left and Michael was able to get another position to bring the car home in 12th place. 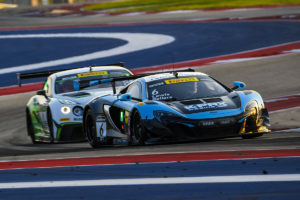 Michael Lewis holds off a challenge by a competitor to conclude SprintX Round 4 in 8th position.

“Bryan and I both drove very well,” Michael said. “This race saw many teams and drivers get penalties and it helped us move up the pack. When we saw that we were in about 7th or 6th place just after the pit stop, we thought that we could have a solid result, considering we had to start in 13th. Right when we were thinking that the overheating issue occurred. It was a bummer that it happened because of the strong position that we held. Fortunately, the K-PAX Racing team found out what the issue was and have ensured that the final race everything will go according to plan. It is so great to be on a team with such dedicated team members and to find the smallest of issues to make our cars run well.” 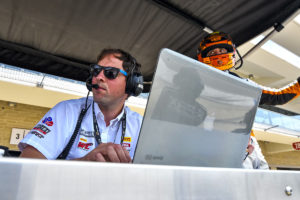 Engineer Sebastien Constants and Driver Bryan Sellers pictured here. Michael truly enjoyed working alongside them in the No. 6 car.

For the third and final race of the weekend, the duo started the race in 11th place, after qualifying for the final race was set by the fastest lap of Saturday’s race. Michael took to driving the McLaren first in Round 10, and as the cars exited the first turn and drove to Turn 2, Michael was fortunate to avoid a massive crash. As a result, Michael emerged in the 6th position. After several laps of yellow-flag conditions, the track went green again with Michael battling hard with the pack in 6th place. Michael and the other cars continued to battle for positions, and on lap 10 the pits opened. He brought the K-PAX Racing McLaren onto pit road with 28 minutes left in the race where he jumped out of the McLaren and Bryan Sellers took over during the mandatory 60-second pit stop. Bryan set his sights on driving further to the front and also fought off tough pressure from behind to bring the car across the finish line in 5th of 31 cars that started the race. 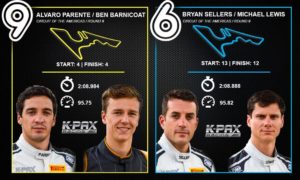 SprintX Round 9 race results for No. 9 and No.6 K-PAX Racing teams.

“I was extremely lucky to get through that accident in Turn 2,” observed Michael. “The start was good and although I gained some spots into Turn 1, I lost some spots on the exit. Just as we were getting to Turn 2, I felt I should be a bit cautious because we were all running so close and so hard. Luckily, that decision to lift a bit more than normal helped in avoiding a big crash, but I feel that luck had a bigger part in getting through it. Under the yellow-flag conditions I thought that we had a shot to get on the podium. From there, I was warming my tires and thinking of how to get the best restart possible to hand the car off to Bryan in a good position. The restart was really good, but I had to abort a move for 5th place, which saw me briefly shuffle back to 7th place and then regain 6th place on the same lap. It was intense, and when Bryan got in the car after a good pit stop, I was impressed with his pace under pressure from some pretty fast cars behind him. He kept them behind and earned a strong 5th-place finish. This week was really testing our team and we had to always arrive from the back to score our finishes to the front. Thank you to Bryan for being such an amazing co-driver, and thank you to my engineer Sebastien, our car chief Charlie, as well as Derek, John, and Sean for preparing a fast No. 6 McLaren race car. Also, thank you to K-PAX Racing for providing such a strong platform for us to perform. I will always remember this year. Thank you to The Smile Generation, ASE, Cometic Gasket, Inc., Klotz Synthetics, Graymills, RFMS Racing, Mr. Paint, Incorporated, Bell Racing USA, Stand21 North America, CXC Simulations, and JDR Graphics for their contributions toward our cause. I look forward to the next opportunity to race with this team and to see all of the wonderful people, friends, and fans that are at the race track!” 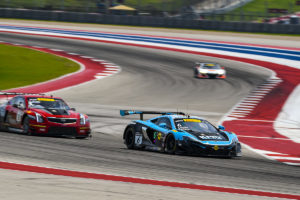 Despite a challenge from the Cadillac, the McLaren of Michael Lewis and Bryan Sellers held on and earned a 5th-place finish in round 10 of SprintX.

This concludes the 2017 Pirelli World Challenge SprintX Championship. Visit www.mjlracing.com during the off-season for news about Michael’s race plans for 2018. 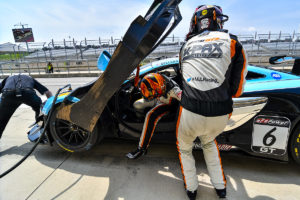 Driver change between Bryan Sellers and Michael Lewis during the SprintX Round 10 on Sunday, September 3. 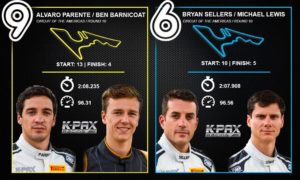