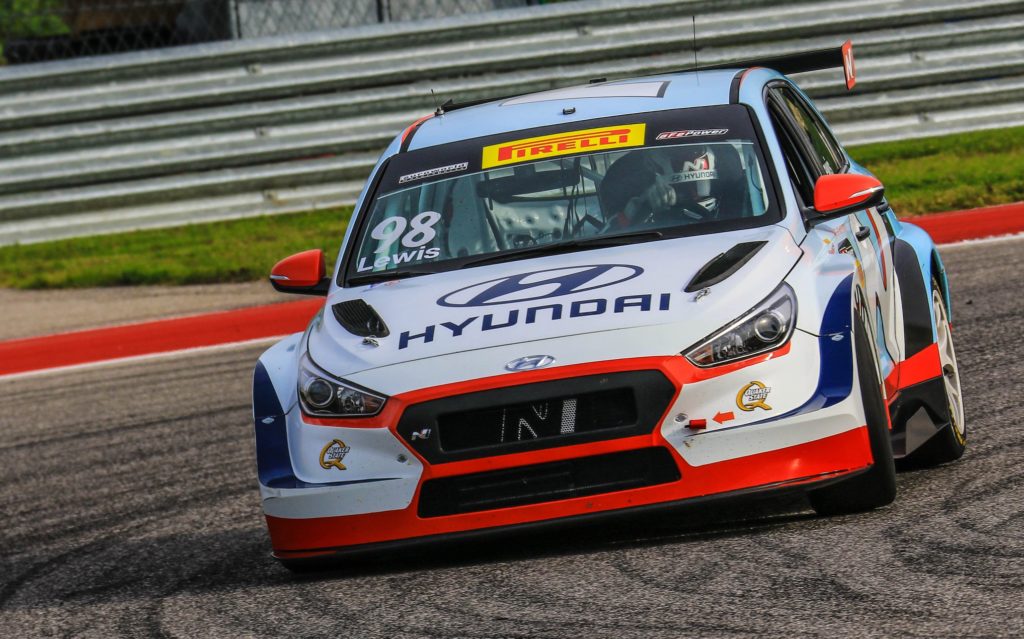 Michael Lewis is seen here on his way to recording the first win in the Pirelli World Challenge TCR class at Circuit of The Americas on Saturday, March 24, 2018. Photo courtesy of RedCasePhotography.

Austin, Texas – It was a dominant performance for Michael Lewis and Mark Wilkins Saturday at Circuit of The Americas (COTA) in the inaugural running of the all-new TCR class in the Pirelli World Challenge Grand Prix of Texas with an impressive 1-2 finish in their Bryan Herta Autosport with Curb-Agajanian Hyundai i30 N TCR cars.

The 40-minute TCR sprint event at the 3.427-mile, 20-turn road course was the first TCR event held with the Pirelli World Challenge road racing series and the two Hyundai i30 N TCR competitors were the class of the 14-car field at the drop of the green flag Saturday afternoon. 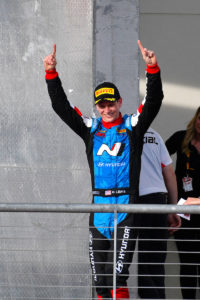 Earlier in the day, Wilkins captured the pole position in qualifications with the No. 99 BHA Hyundai i30 N TCR and looked to be the favorite in the Round 1 event. Wilkins, the veteran racer from Mulmur, Ont., Canada, also led the TCR practice sessions on Friday at COTA after his car made its first appearance on Thursday in testing. The car had not turned a wheel before the COTA test runs.

Wilkins, from the pole, and Lewis, from the outside front row, went side by side into turn one at the top of the hill at the famed COTA circuit, but Lewis, the 27-year-old Laguna Beach, Calif., driver, used a strong line into turn two and grabbed the lead in the No. 98 BHA Hyundai i30 N TCR. Wilkins kept his teammate honest throughout the 17-lap feature by being right on the rear bumper of the No. 98.

In fact, Lewis had to slow on the final lap for lapped traffic and Wilkins tried the inside in turn one for a pass. But the youngster didn’t waver and held his margin in taking the checkered flag by 1.137 seconds. 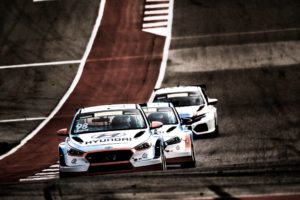 Bryan Herta Autosport quickly made an impact in the inaugural TCR season of the Pirelli World Challenge, taking wins in Rounds 1 and 2 at Circuit of The Americas last weekend. Photo courtesy of RedCasePhotography.

“Mark was able to beat me in qualifying and we had a clean race into turn two at the start of the race,” said Lewis. “Under braking, he was better than me and he was pushing me. The Hyundai i30 N TCR was good throughout the race and we needed to consider tire life after this race. On the last lap, I saw a lapped car going very slowly in a yellow flag area and I couldn’t pass him. Finally, I was able to get by the car and hold off Mark on the final lap for the win. It’s a big team effort and I want to thank everyone at Bryan Herta Autosport, Hyundai and my teammate Mark.”

“We were side by side in turn one and the track was a little dirty outside of turn two,” said Wilkins. “I didn’t want to press the issue. It was a great 1-2 result for the Hyundai i30 N TCR in its North America debut and we are thrilled with that. It is a start of a great new class and a great product. We did have some issues today with tire degradation and we have been learning every session since we didn’t test before last week. All in all, a great result for the N brand for Hyundai and for Bryan Herta Autosport. And I’ll start from the pole again on Sunday, too.” 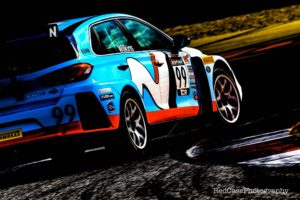 Mark Wilkins drives his Hyunai i30 N TCR race car to victory in Round 2 of the TCR class at the Pirelli World Challenge Grand Prix of Texas. Photo courtesy of RedCasePhotography.

Continuing on through the weekend, Bryan Herta Autosport with Curb-Agajanian put in one of the most dominant performances in a debut in Pirelli World Challenge history at Circuit of The Americas (COTA) in the Grand Prix of Texas with back-to-back TCR 1-2 placings with Mark Wilkins and Michael Lewis in the BHA Hyundai i30 N TCR cars.

For Sunday’s Round 2 event, Wilkins held the inside line into turn one and advanced his position through the esses over Lewis, who started on the outside of row one in the No. 98 BHA Hyundai i30 N TCR. The two Hyundai racers diced among themselves throughout the 40-minute event as they pulled away from the competition. 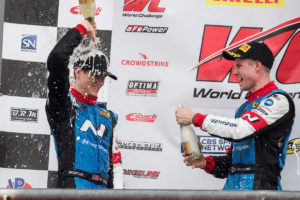 The sensational debut of the Hyundai i30 N TCR cars at COTA was a big story throughout the Pirelli World Challenge paddock, which was filled with 104 entries in the doubleheader race weekend. In addition to the paddock conversation, the Bryan Herta Autosport with Curb-Agajanian squad was the talk of the media center as many journalists met with Herta, Wilkins and Lewis as well.

Third for the second day in a row in TCR Rounds 1 and 2 was veteran driver Ryan Eversley in the all-new No. 43 RealTime Racing Honda Civic Type-R TCR car.

“We used Michael’s Hyundai i30 N TCR in preparation for the COTA weekend as my race car arrived this week and we ran it for the first time last Thursday,” said Wilkins. “The car ran flawlessly, and it was a great first weekend for Hyundai and Bryan Herta Autosport. It’s going to be a very exciting season with many top drivers, teams and TCR cars. It’s always great to win and this weekend seemed like a perfect way to start the year for us. Now, we move to VIR next month (April 27–29) and we hope to continue this trend.” 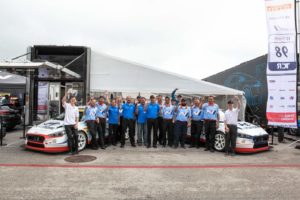 Lewis drove superbly all weekend as well including setting fastest lap of Sunday’s TCR race. Before this weekend’s two events, Michael had not raced a front-wheel-drive machine.

“For today’s race, Mark got off to an excellent start and the 1-2 result that we achieved on the track is a team effort,” said Lewis. “It really didn’t matter if I won or if Mark won, just as long as we were 1-2. He had a strong Hyundai i30 N TCR this afternoon. Once Mark grabbed the lead, I went to slot in right behind him and protect the 1-2 for Hyundai. It was a spectacular debut for the Bryan Herta Autosport team and the Hyundai i30 N TCR at COTA.” 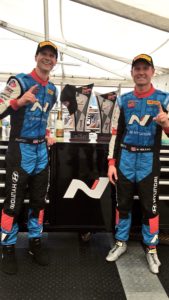 The Pirelli World Challenge TCR series moves to VIRginia International Raceway on April 27–29, with another full weekend of all eight PWC divisions.