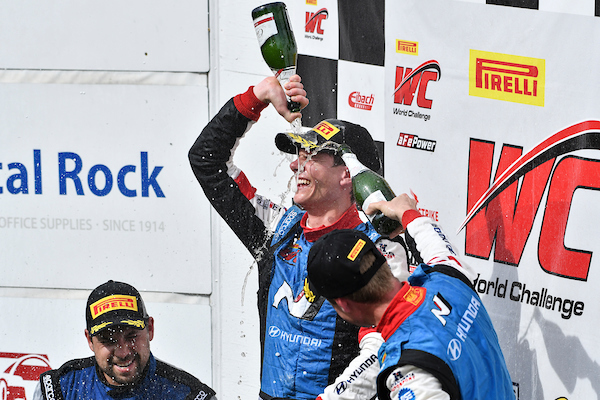 Champagne tastes best when celebrating on the top step of the podium. Photo credit: Bryan Cleary.

Lakeville, Connecticut — Michael Lewis claimed his second TCR feature win of the 2018 season on Saturday, May 26. Michael earned P3 in Race 1 and P1 in Race 2, while his teammate Mark Wilkins earned P2 in both Race 1 and Race 2. 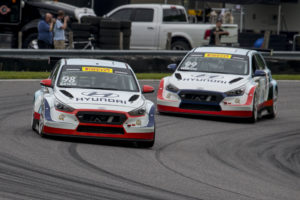 After starting on the pole for the TCR Race 2 at Lime Rock Park, Michael Lewis led every lap, followed closely by teammate Mark Wilkins, who finished in second. Photo credit: Bryan Cleary. 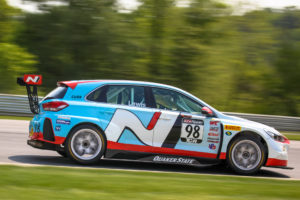 Michael, the Laguna Beach, California, driver, recorded a best lap of 53.859 seconds at 98.52 mph in his No. 98 BHA Hyundai i30 N TCR race car, which placed him P3 for the start of Race 1. When the green flag waved for the rolling start, Michael and his teammate Mark drove side by side into Turn 1. At the exit of the turn, Michael slotted back into P3 and ran nose to tail with the front two drivers in the opening laps. Mark remained in P2 for the entire race with Michael in his tow. The leader had a bit more overall pace than Michael and Mark, but in traffic, which is always tricky to manage at Lime Rock, the leader lost some time. This allowed Mark and Michael to close a bit during the race. After a few caution flags and hard green-flag running, at the end of the 40-minute race, Michael finished in P3. The race ended under caution as a result of an incident with a few minutes remaining. 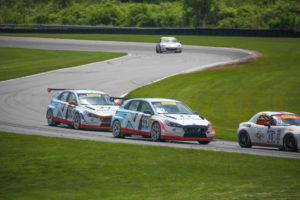 Bryan Herta Autosport (BHA) teammates Mark Wilkins and Michael Lewis weave through lapped traffic as they work together during the TCR Race 1 on Saturday, May 26. Photo credit: Andrew Modena.

Just hours after the conclusion of Race 1, Michael started Race 2 from the pole position as a result of setting the fastest race lap in the first race. After a strong launch from the standing start procedure, Michael proceeded to lead each lap to claim the victory over his teammate Mark Wilkins by 1.124 seconds at the checkered flag. Though the yellow flag flew a few times during this second race, more green flag racing occurred, resulting in Michael and Mark running P1 and P2, respectively, for the entire race. Both drivers executed their jobs well and were able to stay in front of their main competitor who won Race 1. 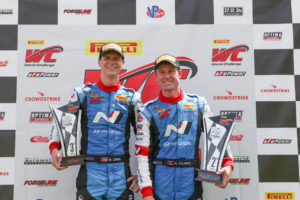 “This weekend we came in thinking we weren’t going to be the strongest due to the changes in BoP (Balance of Performance),” Michael explained. “It ended up being okay, but we couldn’t make any mistakes. Mark executed great in qualifying and Race 1. I did some qualifying antics in Race 1 to get pole position for Race 2, because that seemed to be the only way for us to get a win. It is really hard to pass while on track, so I took a lap in Race 1 to make some space and use the grip of the tires while early in the run, to put down a solid lap time. It ended up being pole for Race 2, but barely. That was my plan and it pretty much ended up working out! Our team did such an amazing job prepping the cars for each session and then applying the necessary changes to them for the following sessions. There was very little time to do everything, and the team did it! I am so thankful for their work to get us on track, and Mark and I had fast cars to work with. It definitely wasn’t easy to get the win, as our competition had just a little bit more pace than us, but we executed our plan well and we made no mistakes. That’s how we ended up on top!” 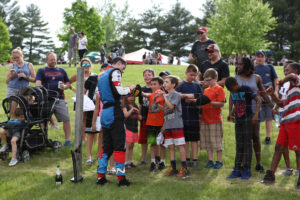 Watch Michael’s interview about his victory in Race 2 by clicking the following two links: 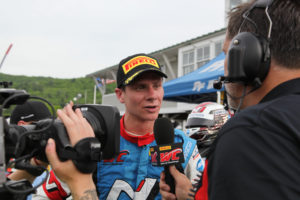 After his victory, Michael Lewis was interviewed for television coverage of the Pirelli World Challenge, which is scheduled to air on CBS Sports Network on Sunday, June 10, at 1 p.m. EDT. Photo credit: Andrew Modena.

The Pirelli World Challenge TCR Rounds 7 and 8 now move to the Pacific Northwest for the annual Rose Cup Races on July 13–15, where Michael and his BHA team will seek more 2018 TCR wins. 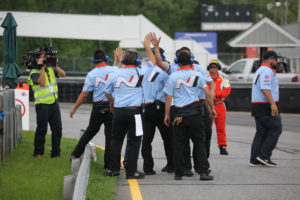 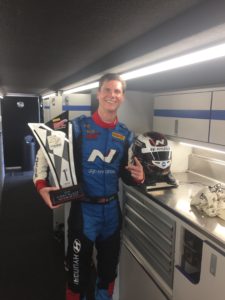 Celebrating his second win of the 2018 TCR season, Michael Lewis displays his trophy in the BHA team hauler.