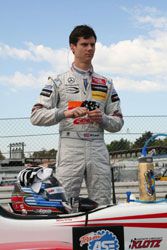 Last season, Michael competed in the Formula 3 Italia series with the PREMA Powerteam, and seeing the promise in the American driver, the team has placed Michael in a new Mercedes-powered Dallara F312 chassis in the highly competitive series for 2012.

The weekend began at the 4.574 km race track with a free practice session in the morning, followed by a 30-minute qualifying session in the afternoon that sets the grid for Round 1. For Michael and the PREMA Powerteam, the primary objective of the weekend was to earn a strong grid position as a result of recording a very good qualifying lap. After the morning practice session both Michael and his engineer Cosimo Prusciano learned valuable information about how to prepare the car for the short qualifying period.

“Even though our lap times for the morning practice session were not what we expected we did learn what the car liked and that information was valuable for the qualifying set up,” explained Michael Lewis. “My engineer Cosimo took charge and made the correct changes, so when it was time to qualify, I was confident that the car would be perfect.” During the qualifying run on the first set of tires Michael was P-5 and was optimistic for a stronger performance on the second set of new Hankook Tires. He was right as with two laps to go he worked his way up to P-3 but fell back to P-4 as the yellow flag waved indicated the qualifying session was finished. 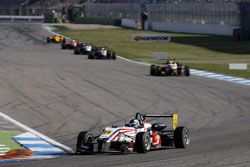 “I was very pleased with the qualifying performance today and I owe my success to the PREMA Powerteam that made all the right changes,” said Michael. “All I had to do was hit my marks and we came out with a good lap toward the end of the session that will place me in the 4th starting position for Saturday’s all important Race 1. The Mercedes engine ran perfectly and I really enjoyed my first F-3 Euro Series qualifying experience.”

As the tens of thousands German race fans jammed into the Hockeheimring, 18 Formula 3 Euro Series cars were positioned on the starting grid in the order based on the Friday afternoon qualifying position for the start of Round 1. As a result of qualifying, Michael Lewis and his PREMA Powerteam Mercedes Dallara F312 was positioned 4th on the grid right behind Felix Rosenqvist. All the cars were positioned on the grid and the drivers had the throttles to the floor with the engines on the “rev limiters.” As the starting lights went out, all the cars started to head for the fast right hand corner of Turn One except for Michael’s car. 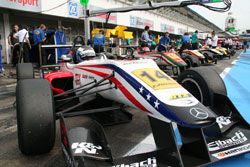 “I had difficulty with the hand brake and when I let the clutch out the car stalled,” explained a disappointed Michael Lewis. “Fortunately everyone missed me but I started the race in last place.” However, the stall did not deter Michael, and it only made him work harder. As the race progressed Michael quickly caught up with the rear of the pack and he methodically began to pass cars. By the 6th lap he had worked his way up to 10th but he lost two positions in the hairpin turn. Again, Michael went on the attack and finished the race in 9th position. During the process of battling with drivers on the track, he found some clear air toward the end of the race and he recorded his best lap of 1:35.051 on lap 18, which was the fourth fastest lap of the 40-minute race.

“I was able to salvage a 9th place finish in Round 1 even after the problem at the start of the race,” admitted Michael. “I knew I had a fast car and it is a shame that I was unable to capitalize on how good the car really was. Now for today’s second race I must start 9th because that is where I finished in this first race. I must continue to work hard to see if I can get a better finishing position.”

Between Rounds 1 and 2, the Formula 3 Euro Series organized a driver autograph session that allowed fans to listen to driver interviews and obtain autographs from their favorite drivers. “The fans here at Hockenheim are very knowledgeable about racing,” said Michael. “It is very enjoyable for me to be able to talk to so many people and exchange thoughts and ideas about the cars and racing on the track. This place is packed with people all day long.”

The Formula 3 Euro Series gives the drivers three opportunities to race at every event this season. After the 40-minute race on Saturday morning, Round 2 is a 20-minute sprint on Saturday afternoon, which worked out to a 12-lap dash for the 18 drivers.

To make Round 2 interesting the first 8 positions on the grid are an invert of the finishing order of Round 1. Because Michael finished 9th in the first race, that determined his grid position for the afternoon sprint race. This time Michael got an excellent start and left the grid in 8th position. Everything looked very positive for Michael until a late breaking move in the hairpin caused Michael to fly off the track and lose positions. Michael worked hard during the remaining laps to work back to 10th position at the finish. A highlight during the race was when Michael became free of traffic on the last lap and he set the third fastest lap of the race at 1:35.383. 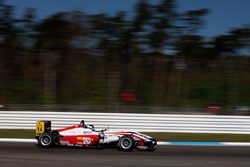 “My car was again really good and I had the speed,” said Michael. “I made a mistake entering the hairpin on the first lap and that was too much of a handicap to overcome. I am now directing my focus to Sunday’s race where we will have another long race. I will be able to start 4th on the grid because that was where I originally qualified.”