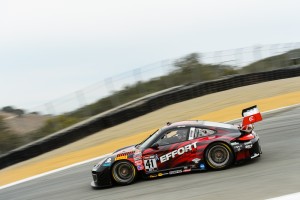 Michael qualified for Round 20 on Saturday, September 12, in 8th position with a best lap time of 1:24.719. “For our last qualifying effort of the year, a P8 performance was a decent starting spot,” said Michael Lewis. “We’re going to try to move up during the race, and we usually do. Starting 8th in the 4th row is pretty solid. My teammate Ryan Dalziel laid down a good lap for another strong qualifying performance with a P3 starting position. I’ll try to follow him in the first few corners to try to move up. The car feels good, and the team has been working as hard as possible with the few amount of sessions we’ve had this weekend. Overall, it was a solid performance and we’ll stay clean during the race and move up the field.” 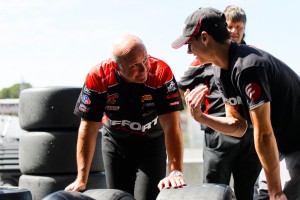 Michael Lewis confers with EFFORT Racing Team Engineer Stefan Pfeifer as they prepare for Round 20 of the Pirelli World Challenge.

On Sunday afternoon, Michael lined up the EFFORT Racing Porsche 911 GT3 R in the 8th position on the starting grid. As the lights went out for the main event of the day, Michael fell back one position, but on lap 5 he passed two cars and moved up to 7th. With 13 minutes left, a battle occurred between the drivers running in 3rd and 4th positions, and they collided with each other, both going off the track. One competitor was able to return quickly to the track, which allowed Michael to move up to 6th. When one of the drivers involved in that incident had to serve a drive-through penalty, Michael then claimed 5th position, where he remained when he crossed the finish line. 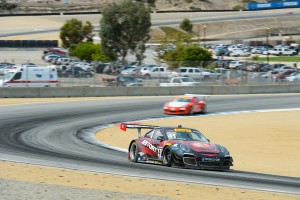 With the goal of earning a top-5 and driving a clean race, Michael Lewis concluded the 2015 Pirelli World Challenge season in the No. 41 EFFORT Racing/Curb-Agajanian Porsche 911 GT3 R with a 5th-place finish.

“A top-5 finish: That’s what we strived to get after yesterday’s qualifying and that’s what we did,” explained Michael. “There was a lot of chaos with this being the last race of the championship. The main players were all going hard, and I was told by my engineer and my team to just be calm and let others make the mistakes. That’s exactly what happened, and I finished 5th with cars flying off everywhere. From the outside, it seemed we steadily moved up, which is what we did. But there were many intense battles happening. I made a few good passes on the start, and even caught up to my teammate Ryan toward the end. I was just a bit behind him and worked to try and help him in his battle against the Cadillac in the remaining laps. Third place for Ryan and fifth for myself in the last race of the season with EFFORT Racing was a nice way to finish the year. Our Porsche 911s were fast all year long, and I owe everything this year to our incredible team including: Team Owner Chuck, Erin, Stefan, Ricki, Paul, Dave, Daren, Reg, Ryan, Chad, and everyone at Porsche Motorsport North America. I would also like to thank the fans and every sponsor that was involved with us this year. Our fans and sponsors being behind us for each race weekend made it fun to represent them and carry their enthusiasm and support. The team, the sponsors, the fans, and our friends pushed us. Even all of the competitors in the paddock were a pleasure to race against as well. Thank you to EFFORT Racing and Porsche Motorsport North America for the incredible opportunity; I am very grateful. What a nice year!” 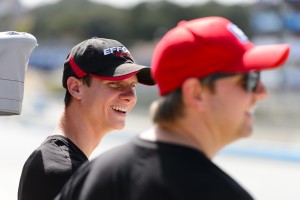 All smiles for Michael Lewis and EFFORT Racing teammate Ryan Dalziel as the teammates finished 8th and 3rd, respectively, in the 2015 Pirelli World Challenge drivers championship.

Michael had several strong performances this season, claiming six top 5s and 13 top 10s. His best performance came in front of his home crowd at the Toyota Grand Prix of Long Beach in April for Round 5 of the PWC. Michael’s 4th-place finish propelled him from the GTA ranks of the amateur drivers to the GT “Pro” category, where he competed for the remainder of the season. He also was the highest finishing rookie of the GT class this season, finishing 8th overall in a field of 47 competitors.

Michael and the EFFORT Racing team celebrated their achievements this season at the Pirelli World Challenge awards banquet on Sunday evening, September 13. Recognizing the EFFORT Racing team’s impact on Michael’s move up to the GT class from GTA in 2015, along with teammate Ryan Dalziel’s 3rd-place finish in the series, even after missing four races during the season, the team was voted as the best team by their peers in the GT category. EFFORT Racing also won the GT team championship, which was based on their drivers’ performance for the season, and earned the manufacturers championship for Porsche. 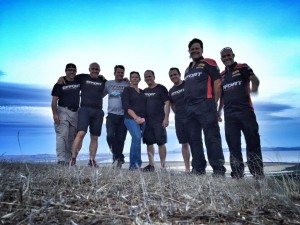 Voted Crew of The Year (by peers and fellow teams)