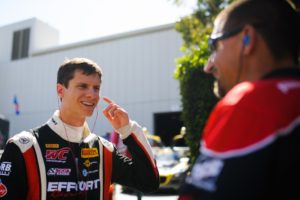 Michael Lewis looks forward to competing before his home crowd at the 42nd Toyota Grand Prix of Long Beach just before the first practice session on Friday, April 15.

Preparation for Round 5 of the Pirelli World Challenge (PWC) began on Friday, April 15, when the first practice session took place in the afternoon on the 1.968-mile temporary street circuit. Michael and the EFFORT Racing team experimented with setups for Saturday’s early morning qualifying session.

On Saturday, Michael and teammate Patrick Long participated in the second practice session, soon followed by the first of two qualifying sessions. Michael qualified 6th fastest in the first session with a time of 1:19.669 that was strong enough to hold that position even after the second qualifying session that featured different drivers, so that is where he would start for Sunday’s main race. 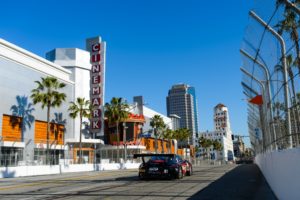 Michael Lewis sets the sixth fastest time during the first qualifying session of the Pirelli World Challenge’s visit to the picturesque race course on the streets of Long Beach, California.

“This qualifying session put my teammate Patrick and I toward the front of the field,” explained Michael Lewis. “It’s the home Grand Prix, and it’ll be fun to get a win for my fans and family who will be in attendance. It’s going to be a hard feat, because everybody up front is fast, like my teammate as well. To get on the podium will be nice. We’ll start sixth and go from there. We’ve got a day of rest before the race.” 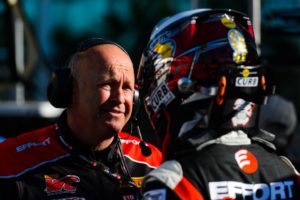 Michael lined up the No. 41 EFFORT Racing / Curb-Agajanian Porsche 911 GT3 R on the outside of Row 3 to start Sunday morning’s race. When the green flag waved, the field quickly approached Turn 1 and Michael fell back to 8th after the 1st turn as he avoided contact with other cars. By the end of Lap 1, a full-course caution came out due to two competitors colliding, leaving one car on the track. After a lengthy caution period, the race returned to green. Michael was running in 9th position on Lap 12 when another car hit a tire barrier, again bringing out another full-course caution flag. However, as the course went back to race conditions, Michael moved up to 8th, and was able to earn additional positions to finish the 30-lap, 50-minute timed race in 6th place. 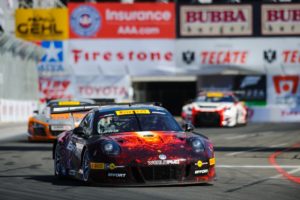 Michael Lewis drove a clean race at his home event and brought the No. 41 EFFORT Racing / Curb-Agajanian Porsche 911 GT3 R to the finish line in 6th position.

“We started 6th and finished 6th,” commented Michael. “That’s a solid day, and we survived that race. We brought the car home clean, and the Porsche 911 GT3 R was fast over the long run. There were a lot of restarts out there, and it was pretty chaotic. I was just trying to be smooth and just keep my track position and keep the car clean. I fell back a little bit but then bounced back in the chaos. Congratulations to my teammate Patrick Long for getting a podium at his home race. We have two clean cars going into Barber Motorsports Park and we picked up more points.” 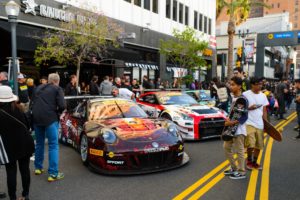 Southern California race fans were able to see Michael’s No. 41 Porsche 911 GT3 R up close as it was on display in Long Beach prior to Round 5 of the Pirelli World Challenge.

Michael Lewis and EFFORT Racing will next compete this weekend at Barber Motorsport Park, in Birmingham, Alabama, April 22–24, for Rounds 6 and 7 of the Pirelli World Challenge.